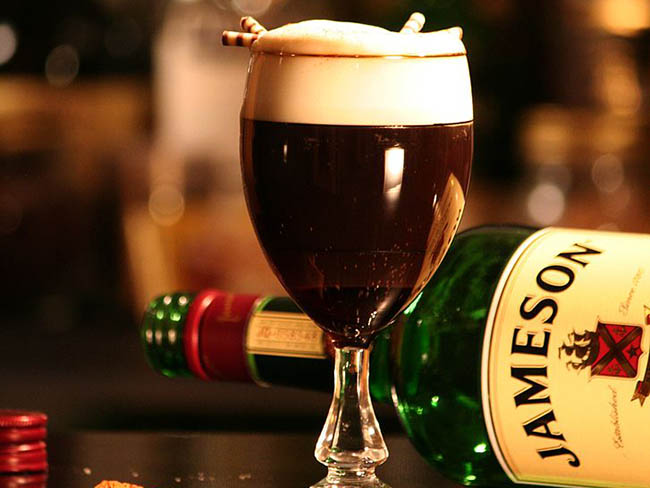 by Lizette Barretto-Gueco, via FoodfindsAsia.com |

Coffee has been a feel good beverage since time immemorial. Alcohol, (as I’m sure we can all relate), can also give a certain happy buzz, even when taken in moderation. So someone, somewhere, sometime, thought that putting them together might make it “The Bomb Diggity!” And it surely is!

In ancient history, when coffee was quite new, people were scared of it and the effect it had on them. It had been blamed for inspiring indecent behavior, starting a revolt, causing paralysis and the most ludicrous of all, it was blamed for every type of impotence in men. The religious back then referred to it as Satan’s drink. So coffee and alcohol together was asking for trouble.

In later centuries, urban myths were dispelled, thus bringing a wider acceptance of coffee. People adapted it into their own cultures and to suit their climate.

Looks like the Irish had something good going when they added some excellent Irish whiskey to their cuppa to keep warm. The Mexicans added tequila and Kahlua to their mucho fuerte coffee for that added zing. Other countries have their own versions. Wouldn’t it be fun to try them all?

I am hardly a coffee connoisseur. In fact, I am a late bloomer when it comes to joining the coffee bandwagon. As children, the older generation always told us that drinking coffee would stunt our growth. So for this reason alone, we stayed as far away from coffee as we possibly could and denied ourselves the pleasure of even a sip way into our adult years. Of course, there is no study that can prove that coffee has an effect on bone mass so it could really be just a myth. And besides, my lack of height cannot be blamed on coffee drinking in my younger years.

In the morning is when I crave my cup of Joe like lots of people. It is the best part of waking up as the wonderful aroma and the caffeine jump-starts all my senses. I am not a straight up black or espresso coffee drinker. Never learned to take it that way. I am a little more creative in my tastes, although, quite snobbish with instant coffee. I enjoy the brew from freshly ground beans on a drip coffee maker, French press, percolator or siphon coffee maker with lots of steamed frothy milk and a little muscovado sugar. Sometimes, I add some chocolate or cinnamon. I occasionally even like the flavored coffee like macadamia or hazelnut or add some Kahlua or Baileys Irish cream. I’m always game for some fun with my coffee.

I’ve always dreamed of operating my very own coffee shop to showcase my coffee ideas and baked goodies with myself serving up the espressos and the cappuccinos and the lattes from behind my own bar. So when my 2 entrepreneurial nephews, Patrick and Alvin, came up with the brilliant idea of putting up a coffee shop with a twist, I felt my dreams were being fulfilled through family members. I got so excited as if it were my own.

Tipsy Beans opened its doors in June of 2013 in Mandaluyong with a 30 person seating capacity and a tiny kitchen. The brainchild of 2 crazy brothers with a vision of redefining the usual coffee shop experience by infusing liquor in their coffee, (and sometimes in their food) created for them a niche that is still mostly unexplored territory in the Philippine setting. The aim is to be a household name in the very near future.
In the 2 years since it opened, they have added a kiosk in Paseo de Roxas, popular with the working set, a mobile bar that can be hired for parties, meetings and other occasions, a packed food delivery service for offices and the latest addition, another branch at Jupiter St. Makati City. Not too shabby! Way to go boys!

Try their Irish cream on Coffee Rocks. Absolutely delish! Or the Milo Chupacabra with tequila. Also, the unusual Bacon Milkshake for the more adventurous and the Milo Godzilla or Dinosaur for the uninitiated ones and little kids as it has no alcohol, only ice cream, are worth trying. The Mint brownies are a delightful choice too in the dessert and cake menu

Sharing with you my go-to coffee cake recipe. Whenever I serve it to my coffee-time guests, it disappears faster than I can say “Hot Mocha Java!”

In case anyone wondered, coffee cake is not necessarily made with coffee. It is meant to be eaten with coffee.

I leave you with my most cheerful Good Morning! May your day be as awesome as your first sip of coffee.
* * *

Lizette Barretto Gueco is a regular columnist at FoodFindsAsia.com.  She writes about her life’s passions which are family, home, food, relationships and how they fit in perfectly in her scheme of things and in the circle of life.

Lizette is now a busy home based mom after working in marketing and the travel industry for some time. She also ventured into jewelry design while she was a partner at a prestigious jewelry store at Greenbelt 5. Aside from juggling family schedules and managing the home, she also finds time to bake and sell her sweet offerings from her home as well as indulge in her other hobbies like jewelry making and arts and crafts.  She is an amateur filmmaker, traveler, foodie, dreamer and lover of life.

Lizette is a graduate of AB Communication arts from the Ateneo de Manila University.  You can email her at lizbgueco@gmail.com