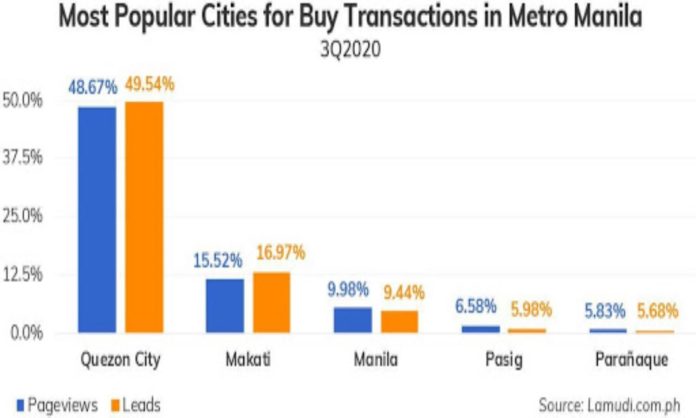 PropertyFindsAsia.com | THE OUTLOOK BY LAMUDI: Urban centers  booming regions show strong property demand in 3Q 2020 | Against the background of a health crisis, the first half of 2020 was a period of new challenges and opportunities for the property sector. As the country welcomed the third quarter, quarantine measures have eased up in almost all parts of the Philippines. The government moved to reopen the economy and recover from the ills of the pandemic. With careful observation of health measures, different regions have resumed business activities while putting in place efforts to fight coronavirus.

In this report, Lamudi aims to provide a snapshot of the state of real estate in the third quarter of 2020. We take a deep dive into the performance of key locations in terms of demand and supply.

The easing of quarantine protocols have benefitted the property sector. Construction initiatives were able to resume and government offices began issuing development permits again. Property seekers have maintained a strong appetite for real estate in major regions as they became more at ease with the new normal.

Even in the third quarter, the most popular cities in the capital region are areas that host business districts and economic centers. This is a trend that has remained constant throughout the year.

In terms of the most viewed locations in Metro Manila for properties for sale, Quezon City led the list, accounting for almost half of the pageviews at 48.67 percent. Makati and Manila followed, with 15.52 percent and 9.98 percent of the pageviews, respectively. Pasig came next at 6.58 percent, and Parañaque at 5.83 percent.

The previous Lamudi trend report also mentioned Quezon City, Makati, and Pasig, with these cities being hosts to important business districts in the country. Manila, which houses the largest port in the country, and Parañaque, which is home to Bay City, have both taken a lead in the third quarter. This development may be attributed to more property buyers exploring locations close to employment opportunities.

Interestingly, individuals looking to rent have looked at these same cities as well.

Furthermore, the same five cities also topped the list of Metro Manila locations with the highest number of leads. Quezon City maintained its popularity and accounted for almost half of the leads at 49.54 percent. Makati came in second with 16.97 percent, followed by Manila at 9.44 percent. Pasig and Parañaque came in next with 5.98 percent and 5.68 percent, respectively. These areas registered the highest number of inquiries and emerged as the most preferred locations for for-sale properties in Metro Manila.

Specifically, interested buyers inquired about houses the most, with this horizontal real estate development type accounting for 43.27 percent of leads. Land obtained 31.52 percent, while condominiums got 17.02 percent.

These top five cities have also commanded great demand even in the first and second quarters of the year, making them truly resilient real estate hotspots amid the current crisis.

Meanwhile, in the Visayas region, the main urban center of the Cebu province registered significant growth in terms of pageviews and leads. From the first quarter to the second, the metro saw a 26.5 percent increase in pageviews. Although there was only a 22.1 percent increase in pageviews from the second to the third quarter, the figures in the latest quarter were a significant leap from how it registered at the start of the year, corresponding to a 54.46 percent growth in pageviews from the first quarter of the year to the third quarter.

The inquiries, meanwhile, experienced a 49.79 percent growth from the first to the second quarter. Inquiries from the second to the third quarter grew by 11.98 percent, corresponding to the height of the strict quarantine measures in Metro Cebu. Given the circumstances, registering such an increase showed Cebu real estate’s resilience amid restrictions on movement.

As quarantine measures eased in the third quarter, most buyers in Metro Cebu looked into houses; 51.81 percent of the searches in Metro Cebu during this period were for this property type. Land, on the other hand, accounted for 30.76 percent of searches during the same time frame.

Although foreclosures weren’t the top choice for property, the number of inquiries for this type of real estate exceeded the number of pageviews, which may be an indicator that property seekers are more serious about purchasing this property type.

Cebu City is the top choice in the region. Aside from posting the highest number of pageviews and leads, it also had the most popularity among property seekers abroad, accounting for 80.73 percent and 82.56 percent of the overseas pageviews and inquiries in the region, respectively.

The most popular property types in the region are house, land, and condominium. Houses accounted for more than half of the pageviews at 50.58 percent. Land took 32.29 percent, while condos obtained 10.03 percent of the pageviews. In terms of leads, land had the most inquiries among those looking to buy. It registered 48.55 percent, which corresponds to a 34.01 percent increase from last quarter. This signifies that most property seekers are eager to buy lots for sale in Metro Davao, particularly in Davao City.

Overseas inquiries on Metro Davao properties have remained strong, increasing by 11.98 percent in the third quarter compared to the second quarter.

OFWs form part of the market spurring demand recovery in Metro Davao, as they look to invest in vacant lots for sale, where space can be maximized.

Aside from the urban centers, Lamudi saw a strong real estate demand in other vibrant regions, including South Luzon and Cagayan de Oro (CDO). South Luzon has become a viable alternative to Metro Manila cities as they offer proximity to the capital region sans the hustle and bustle. CDO, meanwhile, has sustained real estate demand being the regional center of Northern Mindanao.

The number of people looking at properties in this region rose by 27.68 percent in the third quarter compared to the second quarter of the year. In terms of purchase inquiries, there was a minor dip of about 1.28 percent in the period mentioned. However, looking at the entire year so far, there was a notable 71.45 percent growth in leads from the first quarter to the third.

In the third quarter, the five most-searched cities in the South Luzon region are Antipolo (17.90 percent), Bacoor (15.92 percent), Imus (9.75 percent), Santa Rosa (8.94 percent), and Calamba (8.80 percent). These provincial areas are highly urbanized and host a range of developments, from upscale residential communities to sprawling malls and industrial parks.

Most property seekers looked for houses, with this property type garnering 49.37 percent of the pageviews in South Luzon. Vacant lots for sale were the next most popular real estate  type, attracting 31.19 percent of the views.

The same locations registered the most number of leads. Interestingly, lot only properties received the most inquiries at 45.91 percent. This signifies that property seekers are eager to buy lots for sale in the urban areas of Cavite, Laguna, and Rizal.

The appeal of South Luzon to property seekers isn’t unknown. Over the last years, the region has undergone massive development and urbanization. Property developers have flocked to Laguna, Rizal, and Cavite for their new launches, while the national government introduced several infrastructures in the area, including CAVITEX (Manila-Cavite Expressway), CALAX (Cavite-Laguna Expressway), and Southeast Metro Manila Expressway (C6).

With more mixed-use development projects rising in the area, along with transportation networks such as the PNR South Long-Haul and MRT-4, property seekers are expected to show more interest in this booming region.

Meanwhile, over in the southern region of the Philippines, CDO is also displaying its strength in terms of real estate demand. It has seen a 20.53 percent increase in pageviews in the third quarter. Comparing the current figures to the numbers at the first quarter, there was a significant 67.2 percent growth in leads.

Houses and lots for sale in CDO are the most searched among the property types in the area, corresponding to 50.01 percent of the searches. On the other hand,  lot only projects in CDO received the highest number of inquiries, taking 49.79 percent of the total.

Similar to Southern Luzon, CDO is a recipient of big-ticket infrastructures. The Port of Cagayan, which was completed last year, has the country’s biggest port passenger terminal building. The government is also gearing up for the improvement of Laguindingan Airport, which serves as the gateway to the city. As the region becomes more accessible to tourists and businesses, it’s set to attract more property seekers.

Real estate remains a practical investment and the residential demand from the previous years indicates the tread of growth post-pandemic. In 3Q2020, the growth in supply in Philippine real estate hotspots indicate areas inviting investment opportunities.

According to Lamudi’s data for the third quarter of the year, Quezon City had the most number of listings within Metro Manila, accounting for 30.85 percent of the total listings in Metro Manila.

Interestingly, Las Piñas is the second most listed location on the platform for the third quarter of the year, accounting for 13.71 percent of the supply. It grew by 44.2 percent compared to the previous quarter. This increase may be attributed to greater demand for properties in the fringes of the capital region, a key finding cited in the previous Lamudi trend report.

Next to Quezon City and Las Piñas, Makati, Parañaque, and Taguig complete the list of areas with the most number of listings.

House and lot properties for sale remain as the most popular listing in Metro Manila in the third quarter. It represented 52.95 percent of the total listings, with condominiums coming in second at 31.97 percent.

Cebu City emerges as the top listed area in Metro Cebu in the third quarter of the year, accounting for 62.84 percent of the total listings in the region. The city also saw a slight uptick of about 2.09 percent from the last quarter. Lapu-Lapu followed with 12.06 percent, while Mandaue ranked third, registering 10.20 percent of the share.

Condos and houses accounted for the most number of Metro Cebu listings, with only a small percentage difference between them. Condos accounted for 37.77 percent of the listings, while houses registered 30.54 percent.

Cebu City is also projected to be the top choice for businesses as they lean towards the city’s business district and offices in IT Park. Meanwhile, the residential market, particularly horizontal developments, is expected to grow with the demand from OFWs investing in property in the Philippines.

Aside from being the top listed city in the region, Davao City also saw an increase in listings quarter-on-quarter. In the third quarter, it saw a slight uptick of five percent.

The next top listed areas in the region are Island of Garden Samal, Panabo, and Tagum.

Land (33.72 percent) has dominated the listings posted in the region, complementing the increased inquiries for lots for sale in Metro Davao, especially in Davao City.

Houses ranked second on the list with 29.32 percent. As the economy recovers and the market offers low mortgage rates, OFWs will regain buying power particularly for lot-only projects.

The strict stay-at-home protocols mandated by the government has brought new insights to property owners and seekers. The hunt for ideal locations that are highly urbanized and have easy access to public transportation outside Metro Manila has also paved the way for developers to market their properties, letting them stay resilient in these trying times. In addition, the development of house and lots is continuously growing as buyers and renters are on the lookout for attractive offers.

In summary, here’s what we have learned:

The third quarter of the year is marked by resilient property hotspots and booming places of interest. Movements in demand and supply in the remaining months of the year will heavily depend on the state of the current health emergency. Nonetheless, the reopening of the economy will prove optimistic for the property sector moving forward.