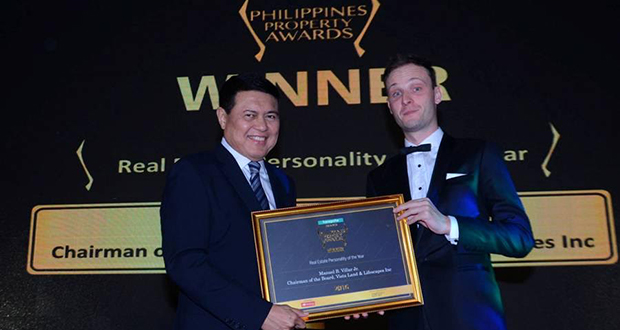 Mr. Villar is the fourth recipient of this award and was the only award chosen by the editors of Property Report, Asia’s leading luxury real estate, architecture and design publication.

“It’s a great honor to get this award. Vista Land started as a housing company; we just wanted to provide homes for our people. It has diversified into a lot of other things because we want Vista Land to be a complete real estate company. But we have not lost sight of the original objective why we are in this business, and that is to provide homes for our people,” he said in his acceptance speech.

Mr. Villar, who started from humble beginnings, also recognized small developers in his speech saying that “As I was watching the awarding, I thought that maybe we should also focus on small developers nationwide…and there are many.”

Vista Land, on the other hand, won three major awards and received two highly commended honours during the night, with Northpoint, a British Colonial-themed condo development, winning as Best Residential Development (Davao). It was also acclaimed as Best Housing Development in the Philippines and will move on to compete at the South East Asia Property Awards grand finale to be held in Singapore.

Vista Land’s projects have been recipients of the Best Housing Development (Philippines) award for three consecutive years, with Portofino and Amore, both Brittany projects, winning in 2014 and 2015, respectively, with the addition of Northpoint this year.