Home Leisure + Travel Which destination has the world’s best food? 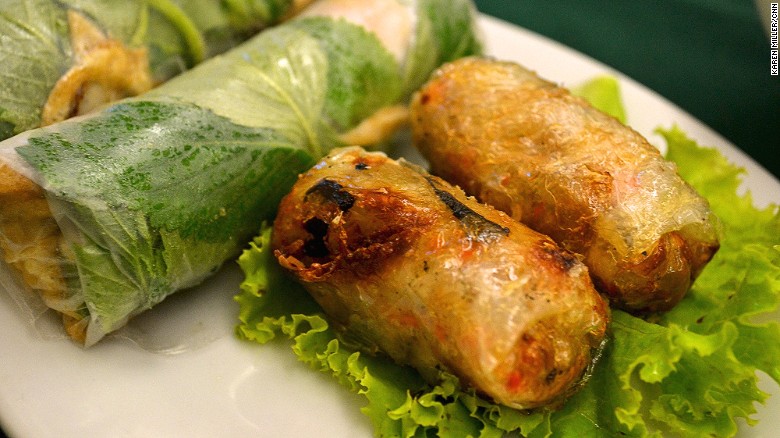 (CNN) For traveling foodies, local cuisine is as important as the destination itself when planning a trip.

To highlight the most popular cuisines on the planet right now, we asked CNN readers to vote for their favorite culinary destination in an open Facebook poll.

Clearly, Asian food is on people’s minds these days.

That or we have a lot of readers in the region who want to support their homeland’s culinary prowess.

With the exception of Italy and Greece, every place on our list is in Asia.

Ready to hop on a plane?

Here are the top 10 culinary hotspots according to our voters, along with a quick but all-important summary of what you’ll be chowing on once you get there.

Check out the above gallery for some sample dishes from each destination.

A bowl of beef noodles is a fine way to dive into Taiwan’s eating scene.

The culinary philosophy in Taiwan is simple.

Small eats — but lots of them — are the big thing here.

The island’s food is a mash-up of the cuisine of the Min Nan, Teochew and Hokkien Chinese communities, along with Japanese cooking.

The Taiwanese capital, Taipei, alone has around 20 streets dedicated to snacking. And then there’s Tainan, Taiwan’s oldest city, which is often referred to as its food capital.

Blessed with an abundance of seafood, tropical fruits and creative cooks, there’s more to Filipino food than the mind-boggling balut (duck embryo).

Filipino food isn’t as well known as the other cuisines on this list, but with more than 7,000 islands and a colorful history, this archipelago has some delicious dishes of its own.

Adobo, for instance, is an ubiquitous dish whipped up in every household in the Philippines. It’s Mexican in origin, but Filipinos found that cooking meat (often chicken and pork) in vinegar, salt, garlic, pepper, soy sauce and other spices, was a practical way to preserve meat without refrigeration.

Lechon, meanwhile, is the Philippines’ most popular party guest. An entire pig is spit-roasted over coals, with the crisp, golden-brown skin served with liver sauce, the most coveted part.

Italian food has enslaved taste buds around the globe for centuries, with its zesty tomato sauces, those clever things they do with wheat flour and desserts that are basically vehicles for cream.

But despite the successful export of the “Italian restaurant,” the idea of a unified Italian cuisine is something many Italians reject.

Instead there are regional dishes, sometimes with tastes as different as you’d find between countries.

Even the basics differ — pasta with or without egg, butter in abundance or ditched completely in favor of olive oil.

But let’s be honest.

Whether you’ve hit up Sicily to gorge on arancini, made a special trip to Naples to sample the world’s best pizza or took a train to Modena to taste the world’s finest Parmigiano-Reggiano, no corner of Italy will leave your stomach disappointed.

Given that one of the first things Thais ask each other when they meet up is “have you eaten yet?,” it’s clear this is a nation that’s extremely passionate about its eats.

With influences from China, Malaysia, Indonesia, Myanmar and a royal culinary tradition, Thai cuisine is the best of many worlds.

The combination of so many herbs and spices in each dish produces complex flavors that somehow come together like orchestral music.

For something really flavorful, check out the country’s northeastern — or Isaan — cuisine.

Japanese apply the same precision to their food as they do to their engineering, taking their love for food a step — or several galloping strides — further than most nationalities.

You can get a lavish multi-course kaiseki meal that presents the seasons in a spread of visual and culinary poetry or grab a seat at a revolving sushi conveyor for a solo feast.

Where else do people head out for a weekend road trip, the sole purpose of which is to sample several varieties of a single dish?

Modern Japanese kyodo ryori, or regional cuisine, is a tourist attraction in itself, with nearly each major city having its own signature dish.

The sum of many delicious parts, Malaysian cuisine’s influences include Chinese, Indian and Malay.

In some ways it’s similar to Indonesian food, with the two nations sharing many of the same dishes. (Warning: debates over dish origins can turn nasty in these parts — such is the passion of the region’s food lovers.)

Regardless, once you’re in Malaysia and slurping a bowl of laksa, you’ll quickly dispense with historical concerns and wonder instead where your next meal is coming from and how you can you get to it sooner.

Hong Kongers have a passion reserved just for Hong Kong food that eclipses their love for politics, shopping, gambling, and even — gasp — stocks.

This city is home to some of the most food-obsessed people in the world and produces an alarming array of food items ranging from the stubbornly traditional to unselfconscious fusion foods, each more drool-worthy than the next.

The diversity and sheer number of Hong Kong dim sum restaurants in particular is stunning.

Noisy Cantonese joints where people eat with such determination there’s a slight madness in the air; gilded, hushed dining rooms where waiters anticipate your every move; tranquil oases hidden on a mountaintop … Hong Kong really does have it all.

When a cuisine uses spices in such abundance that the meat and vegetables seem like an afterthought, you know you’re dealing with cooks dedicated to flavor.

There are no rules for spice usage as long as it results in something delicious. The same spice can add zest to savory and sweet dishes, or can sometimes be eaten on its own — fennel seed is enjoyed as a breath-freshening digestive aid at the end of meals.

And any country that manages to make vegetarian food taste consistently great certainly deserves some kind of Nobel prize.

The regional varieties are vast. There’s Goa’s seafood, there’s the wazwan of Kashmir and there’s the coconutty richness of Kerala.

Traveling and eating in Greece feels like a glossy magazine spread come to life, but without the Photoshopping.

Like the blue seas and white buildings, the kalamata olives, feta cheese, the colorful salads and roast meats are all postcard perfect by default.

Gift of gods, olive oil is arguably Greece’s greatest export, influencing the way people around the world think about food and nutritional health.

The spectrum of Vietnamese dishes is surprisingly refined and diverse for such a small country.

Each city — even each village — may have its own list of unique local specialties.

Even common national dishes vary dramatically in the way that each community prepares and serves them.

The cheapest and one of the most delicious places to encounter authentic Vietnamese cuisine is in a traditional open-air market.

Traveling with Care: Questions You Need to Answer Before Traveling Around the Philippines Again