Tan’s Emperador Inc., which acquired Fundador, said in a statement that the purchase was made “in his personal capacity and remains as a private investment of his family.”

The embassies of Australia, Canada and the United Kingdom reportedly have offices in the building, located on prime property.

Emperador Inc., the liquor company which Tan chairs, said it is not involved in the Torre acquisition.

Nevertheless, the company announced last week a deal that strengthens its presence in Spain.

It has acquired Beam Suntory, a Spanish liquor company which sells global brands Fundador Pedro Domecq, in yet another deal that adds to the growing number of Filipino companies    embarking on global acquisitions.

The “all-cash deal” amounting to P13.8 billion or 275 million euros strengthens Emperador’s dominant position as the number one brandy company in the Philippines and in the world, officials said yesterday.

In a disclosure to the Philippine Stock Exchange (PSE), Emperador said that its Grupo Emperador Spain S.A. has reached an agreement with Beam Suntory to acquire the company’s Spanish brandy and sherry business in Jerez, the brandy capital of Spain.

“The acquisition of the Spanish assets and Fundador Brandy is immediately accretive both to Emperador’s revenue and net income,” he said.

“With the combined global reach of Whyte & Mackay and Fundador, our expanded product portfolio will have access to more than 100 countries around the world.

“In our pipeline are several proudly Philippine-made products that we intend to introduce to the international markets starting next year.”

In November 2006, Torre Espacio surpassed the height of the Gran Hotel Bali, becoming the tallest building in Spain.

The structure was topped out on March 19, 2007. That night, Alberto Ruiz Gallardón, mayor of Madrid, attended a ceremony with fireworks to commemorate the event. At 230 meters, it also became the tallest structure in Spain, surpassing the telecommunications tower Torrespaña.

Torre de Cristal, one of the neighboring skyscrapers at the Cuatro Torres Business Area, surpassed the height of Torre Espacio in April 2007.

The building project was featured on the Discovery Channel’s Build It Bigger series due to the skyscraper’s unique form and shape.

It was designed by American architect Henry N. Cobb,  a partner in the firm Pei Cobb Freed, and built by OHL.

In 2009, it became the new home of the British embassy in Madrid. 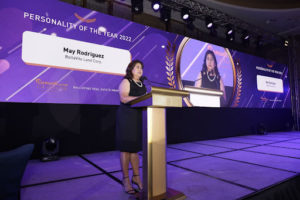 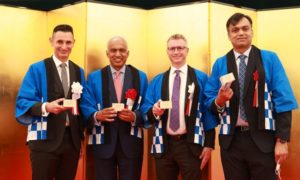