Imagine being at the center of Asia’s newest tourism capital. Imagine being at the center of towering skyscrapers, dazzling city lights, and flamboyant, no-expense-spared hotel-casino resort complexes. Imagine that acres of casino floor space, cornucopia buffets by Michelin-starred chefs, world class spectacular shows, and row upon row of distinguished designer stores are mere minutes from your home. Not only is this city pegged as the one that would bring the Philippines back on the map, it is also the city that would bring the country to the future.

PAGCOR Entertainment City is a 100-hectare project by the Philippine government. Whether you’re a high-roller or a low-key lounger, just wandering its streets is enough to get your heart thumping. Hailed as the country’s grandest tourism development to date, the PAGCOR Entertainment City is expected to play a vital role in altering the reputation of Metro Manila in the global arena.

The Bay City expanse, aimed to rival the casino and entertainment scenes of Las Vegas, Macau, and Singapore. Along with hundreds of restaurants, landmark shops, and designer stores, four world-class integrated hotel-casino and resort complexes will rise in the district. The first to open to the public was Solaire Resort and Casino in March 2013. It is the $1.2 billion flagship endeavor of Bloomberry Resorts and Hotels, Inc., headed by maritime port magnate Enrique Razon, Jr. It houses a 5-star hotel, a grand ballroom, and a large gaming area on 8.3 hectares of land.

Next is the City of Dreams Manila in 2014, a $1.3 billion project by Melco Crown Resort Corporation and Henry Sy’s Belle Corporation. Tapping the world-class brand of City of Dreams in Macau, the development include a large gaming area and a Crown Towers Hotel that will cater to the premium market segment in Manila.

Manila Bay Resorts on the hand opened in 2015, a $2 billion project by Tiger Resort, Leisure and Entertainment, Inc. The sprawling 44-hectare facility will house three hotels including a 6-star hotel that will have 30,000 square meters of floor space for gaming. In addition, there will be an indoor man-made beach, shopping malls, spa facilities, a cinema complex, an amusement center, a concert hall, and plenty of retail and dining options, including a series of fine dining restaurants by Michelin-starred chefs from all over the world.

Resorts World Bayshore by Travellers International is a partnership between Andrew Tan’s Alliance Global group, Inc. and Genting Hong Kong, Ltd. This $1.1 billion project will rise on a lot area covering 31 hectares and will be launched in 2016, the last to open among the four licensees. The master plan for Bayshore features two hotels, a 3,000-seater grand opera house, a shopping mall, residential towers, and an expansive gaming area.

Aside from the casino and resort complexes, included in the list of prominent structures in the Bay City are: Conrad Hotel, Hotel 101, Tunes Hotel, the DFA Consular Office, the Embassy of Qatar, King’s School Manila, ASEANA One IT Center, S & R Membership Shopping, a marina and yacht club, and car showrooms by Ford and Subaru.

A Palatial Address
To be sure, owning a home near the phenomenal PAGCOR Entertainment City is a dream for most. Having hundreds of dining and shopping options and world class entertainment facilities within walking distance from your home is something that most people would call “living the dream.”

Monarch Parksuites benefits from being at the center of the charming and historical Bay Area and within walking distance from the vibrant and exciting Entertainment City. It is the perfect balance between the fresh atmosphere created by the Bay Area’s open spaces and the exhilarating lights and sounds from a booming financial district.

Likewise, your residence looks just as picturesque as its surroundings. With the residential condominium designed to be a modern rendition of Europe’s famous century-old castles, Monarch Parksuites will be a Dutch Baroque masterpiece to rival the works of the world’s greatest Dutch Baroque master, Rembrandt. The building’s classic Dutch architecture is highlighted against the radiant waters of the bay, creating a breathtaking vision as one approaches the property. The stunning exterior blends well with the building’s luxurious location.

Conceptualized as a home that would pass the standards of the high born, Monarch Parksuites is equipped with over 8,000 square meters of amenities that deliver the royal experience. These include a 50-meter lap pool, a private theater, media room, state-of-the-art gym, tennis court, basketball court, and a gourmet dining room, among many others.

Its elegant façade, wide open spaces in between towers, sprawling lawns, charming fountains, landscaped gardens and modern security features all contribute to creating the perfect residential environment coveted by those who want the best of everything in the place they call home.

Moreover, it would be an incredible experience to look out your window and see a feast of colors and lights from Resorts World Bayshore’s sprawling theme park or PAGCOR’S Tower which will be the second tallest building in the world. Fancy a short walk and you can already sip a glass of iced tea inside the magnificent indoor beach of Manila Bay Resorts. And if you’re in the mood for a gastronomic adventure, hundreds of restaurants featuring all of the world’s mouthwatering cuisines are just within walking distance from your home. 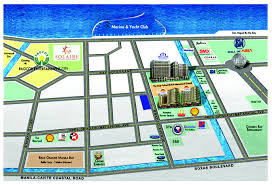 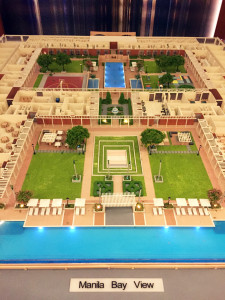