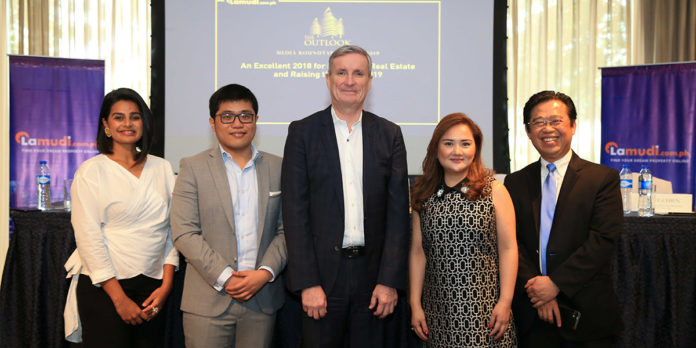 From the role that internet plays in the real estate sector to what’s in store for the commercial and residential property developers targeting the POGO market, the recently concluded Lamudi’s Outlook Media Roundtable Series 2019: An Excellent 2018 for Philippine Real Estate and Raising The Bar in 2019 offered a glimpse of the trends that defined Philippine real estate in the past year and what the future might hold for the sector.

As the internet continues to evolve and advances in mobile technology make communication and information dissemination more efficient nowadays, members of the panel believe that trends in digital marketing have helped them communicate their products and services to their clients.

Ms. Elizabeth Ventura of Anchor Land, for one, noted that not only are they able to educate their clients better about their property offerings, but the projects that the company itself ventures into have become more viable because of the information that they get about their prospective clients and the feedback that they receive from them. “We rely on feedback mechanism so we know what buyers want. When you’re very clear with the needs of the clients, you can properly plan your projects,” Ms. Ventura said. She noted that Lamudi, Philippines’ number one online real estate property platform, will continue to play a more critical role in strengthening the relationship between property developers like Anchor Land Holdings and property seekers who use the online platform in their search of properties to buy and invest it. “We need more info about the clients so we could advance and improve our offerings,” Ms. Ventura said, adding that so far it has been a good match between their property development projects, most of which are located in the Bay City area, and their clients.

A movement and a surge in interest

Ms. Suresh said she is very happy with Lamudi’s search traffic figures, noting that on January 2019 alone Lamudi, has seen an average growth rate of 40 percent week on week in terms of search activity. “These are incredible numbers. We’ve never seen numbers like these.  That’s what we’re very excited about. We’ve seen so much traffic coming in from the Middle East and from the US,” she said.

For Mr. Steve Chien of Keller Williams, Lamudi’s growth in the last five years has been admirable. He credited the property portal for playing a pivotal role in the real estate industry and in helping generate interest among individuals who wanted to become potential real estate agents. “It’s a movement,” Mr. Chien said, adding that Keller Williams, which is the largest property broker in the United States, even had to accommodate more than a thousand individuals in one of their training workshops for prospective real estate agents. Because of advances in communication and in internet technology, “we’ve seen more people participate in the real estate industry,” he noted.

It’s still all about trust

The research head of JLL Philippines also shared Mr. Chien’s sentiment. “We want to harness the technology so we can do a better job,” Mr. Janlo De Los Reyes told the panel.  JLL Philippines country head Mr. Christophe Vicic, believes that technology has impacted everyone in the property development sector. In fact, JLL, which has been in the real estate business for over 250 years, wants to change its focus on how it conducts business in the real estate sector by transforming itself into a technology company that operates in the property development market.

Although the tools of the trade are evolving and changing, the internet, according to Vicic, has not changed the process of buying. “Trust takes time to build,” he noted.

Urbanization as a driver of real estate movement

Asked whether the real estate industry is lagging in terms of keeping up with the demands outside of the metro and trends like condormitels, Mr. Vicic said that urbanization is the one calling the shots.

“The real estate readiness is linked to what the country’s development requires. Outside Metro Manila, 5 or 10 years ago, cities are not yet ready—not because people didn’t want to go, but because there was no viable investment to go to. When we have landlords asking us where to build next, the question should be: where is the next urbanization development taking place?”

Mr. De Los Reyes also shared this sentiment, adding that the demand has always been there, maybe just not as emphasized as what you see. As in the case of condormitels, he noted that areas near popular university campuses like Katipunan, UP, and U-belt, have long offered this type of accommodation to students. And as a response to the evolution of the working population, they are now in the fringes of central business districts like BGC, Ortigas, and Makati.

“There’s a lot of moving parts to it. There’s urbanization. There’s technology. All of these play a role in terms of shaping the readiness of the market,” he said in response.

The rise of POGO segment: boon or bane?

Recent estimates have pegged the current number of POGO employees who are Chinese nationals in the country to as high as 450,000, with this figure increasing to about 2 million over the next five years. This has led to an increase in property prices in Bay City, where most POGO offices are located and where many of the Chinese nationals connected with those firms reside.

“Prices are at around P300,000 per square meter, and that’s comparable to Makati and Bonifacio Global City. What’s happening is the Bay Area is pushing the domestic market away from that community, not only in terms of the sale but also in terms of the rents,” Mr. De Los Reyes said.

For Mr. Chien of Keller Williams, the main reason why rents are going up fast in Bay City can be traced to the growing demand for residential abodes of POGO workers, which property developers need to keep pace with. However, he also noted that the gaming operators aren’t synonymous to the entirety of the anticipated Chinese investment that will enter the country.

JLL’s Mr. Vicic believes that property developers who want to venture into the growing POGO market should learn to invest in the POGO workers. “We do a reference check on Chinese POGO workers (when we talk to building operators).” He also recommended that landlords should keep a balanced mix of tenants in their properties.

“If I were a landlord I would not rely on POGO for a long-term strategy only because it’s highly visible and politically-charged because of the nature of the industry.”

Other topics that the panel discussed zeroed in were on government support for property developers and how urbanization could change the Philippines’ real estate landscape and affect countryside development.

Ms. Suresh chimed in the discussion by saying that moving toward provinces will benefit the country.

“The only flip side there is infrastructure needs to catch up, we need to move our offices to these outskirt areas too,” Ms. Suresh said

MHIENG and MHIEC to Commence Demonstration Testing of Separation, Capture and Effective Use of CO2 from Waste-to-Energy Plant